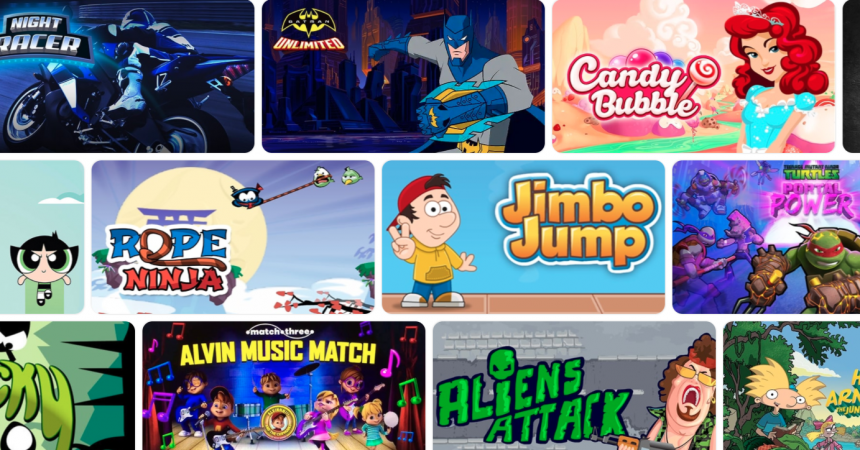 GameMine is the place to be for non-stop mobile gaming. We offer games with no ads or in-app purchases. You will find some of the best games by Sony, Viacom, Nickelodeon, DC, Hasbro, Alamar and a dozen other developers. Play games in virtually every category you can imagine! Choose from Puzzle, Action, Adventure, Racing, Strategy games and more!

Candy Bubble is Gamemine’s take on the always-popular candy games. This game starts at Castle Sugarstone and moves through multiple levels. The aim of the game is to get the candy balls to disappear. Shoot candy balls from the bottom of the screen. Once three or more balls of the same colour are stuck together, they will burst and disappear.

This game may seem easy enough, but you will likely spend a few minutes every day on this soothing game. It comes with a gentle soundtrack and the graphics look like candy.

Zombies Can’t Jump (1 and 2) brings you into a world of danger and comedy. In this world, zombies are out to eat your brain. They have one disadvantage though. They do not know how to jump! As long as you keep building boxes to stand on, they cannot get you. Build stack after stack and collect points as you survive wave after wave of brainless zombies. Use weapons to mow them down and build an impregnable fort of boxes.

The game has multiple levels and the zombies grow stronger with each wave. The game was so popular that they had to make a sequel. You can play both (1 and 2) right here at GameMine! Can you keep our heroes Pedro and Juana alive?

SpongeBob’s Game Frenzy is one of the best games by Nickelodeon. And it is just one of the many Nickelodeon games here at GameMine. This game is a collection of mini-games that will take you on the wildest adventures Bikini Bottom has ever seen! Flip burgers like a pro, eat ice cream, catch plankton, steer a boat or lift weights with the bodybuilder fish. These are just a few of the wacky tasks you need to perform. So tap, draw, tilt, drag and scrub your way to victory. Remember, you have only three lives and need to perform quickly if you do not want to lose them.

SpongeBob’s Game Frenzy is full of hilarious throwbacks to your favourite classic episodes. This game combines nostalgia with nerve-wracking challenges!

If you are looking for an action game with lovable characters, try Teenage Mutant Ninja Turtles Portal Power. This game sees our four legendary heroes Michelangelo, Leonardo, Donatello, Raphael on a wild adventure through space and time. Battle the evil Shredder and the Kraang across parallel worlds and dimensions. Whether on New York City’s chaotic rooftops or the spectacular Technodrome you will find danger lurking on every corner. As the game advances, you will get new costumes for your characters and unlock new abilities. These will help you combat the forces of evil.

The game has very ‘hands-on’ controls, which make for great action. Touch and drag the turtles to help them choose whom to fight and which moves to make. Cowabunga!

In Batman Unlimited, it is up to you to protect Gotham city from the Animilitia. Silverback, Cheeta, Killer Croc and Man-Bat are on the loose, committing strange and violent acts while creating terror all over the city. Luckily, Batman is here to save the day!

While you would expect an adventure or action game here, Batman Unlimited is actually a detective game. You will need to follow clues, gather information and interrogate your suspects. This will help you find out what is happening. Sneak into various locations to find clues that will help you clear your friends’ names. Luckily, you have Batman’s full tool belt at your disposal. Now go and bring the perps to justice!

Batman Unlimited is a surprising take on one of the world’s favourite action heroes. His role as a detective will give you hours of fascinating fun!